The town of Baghmara is a very popular destination in the Indian state of Meghalaya. This town attracts tourists mainly from the local region and also from all across the country flock here because of its natural beauty. There are not many destinations that you can visit in Baghmara, but you can explore the unexplored beauty while taking a walk through its dense forests. Baghmara is rated as a "virgin location" and it seems to be the main reason for its popularity.
The administrative headquarters of the South Garo Hills District is situated in the town of Baghmara. It is a fast developing town, it is also considered to be one of the most important business centres of the Indian state of Meghalaya. The town is situated on the banks of the river named Simsang. Baghmara is situated almost on the international boundary between Bangladesh and India. The distance between Tura and Baghmara is 122 kilometers and the Shillong is at a of 445 kilometers from Baghmara. 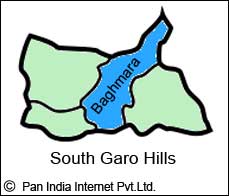 One of the most unique features of Baghmara is that, though the place has witnessed partition and lost all the spectacular locations to Bangladesh, but the magic of the town is not lost. Many modern facilities such as veterinary hospitals, hospitals, middle schools, high schools, colleges, post office, banks are present in the town.

Baghmara was earlier known as Konagittim. Later, the name was changed to Baghmara. People of Bengali origin, who resided here, contributed to the conversion of the name. The name Baghmara has been taken from the name of the founder of the place - ' Pa Balman A Sangma '.

Baghmara is known for its commercial activities where several open markets held in every week. The market is also known as Chimonganli and Bong Bazaar, because Pa Balman had started trading "Agar Wood" here. There are many hill tops, dense vegetation, water falls, rivers and lakes in Baghmara. Various birds, elephants, langurs and other animals are seen in the forests of Baghmara.

Baghmara had a population of 8643, as of 2001 India Census out of which 53% are male and 47% are females. The average literacy rate of Baghmara for males and females is 55% and 45% respectively. According to age based classification, 16% of people are under the age of 16 years.