Balpakram is a hill range located in Garo Hills in Meghalaya, India. Balphakram National Park lies to the west of the Garo hills below the ancient granite Balphakram plateau in the southern part of Meghalaya; it is a national wild life park, about 167 kms from Tura. Garos, the locals dwell in this region; they believe this hill to be the sort of resting place for departed souls.This belief of theirs is mainly due to many strange yet natural biological and physical formations found in the hills. The place is also known for marine fossils, rare flora, and fauna species. It is home to one of the rarest animals in the world - the Red Panda or Lesser Panda as it is commonly known. 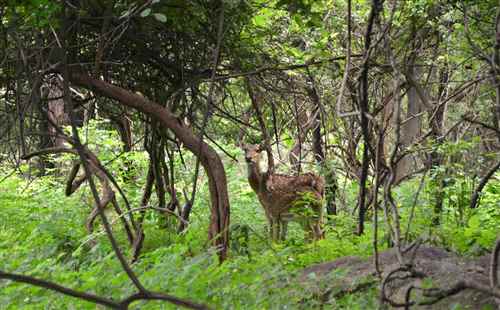 Balpakram covers an area of about 220 sq km with a variety of wildlife including sambar deer, tigers, leopards, elephants, bison, and black bear. The western part of the park adjoins with Siju bird sanctuary along the banks of Simsang River.


Besides being the home of all sorts of wild animals including wild cow, wild bison and elephants; the Balpakram plateau and canyon abound in plants and herbs of immense medicinal value.The National Park can be reached by taking off from the Baghmara-Moheshkhola-Ranikor-Balut-Shil -  long Road,by a place called Sib-bari.


Balpakram has many unnatural and mysterious phenomena that cannot be satisfactorily explained by modern science and logic. Some of these mysterious places are:

This beautiful cave frame a structure of banana flowers with shining pieces of rocks. This cave is situated at the furthest east of the northern side of Balpakram .Balpakram is so steeped in myths and beliefs that even the Hindus believe that it is a sacred place. They believe that when Laxman was badly injured during the war with Ravana; a very rare life saving herb was required, and Hanuman found it here but not knowing which plant to take also in his haste to return broke the top of the hills and carried it away. The portion of that missing hill became a deep awning canyon.  Apart from the above-mentioned sites, there are many mysterious places that you can explore yourself.

On the roadside, there is a firm Boldak tree (schimawalliche) that has a mystery around its trunk as if eroded by the constant bind of animals on it. The Garos assumed  that the spirits of the dead tie their slaughtered animals which has been used for their funeral, where they can then take rest, and a tree would then fall off by strong wind and  soon after it passes on to the others trees as well.

‘Chidimak or Chianggal’ is a small pool found in Balpakram, which is charcoal black. A popular folklore says that the spirits of the dead people wash and clean themselves here before entering the realms of the dead. The clear water therefore turned black from their sins and soots of cremation.

On the South Garo and Khasi Hills border, a very interesting rock tank 120 ft long and 90 ft wide is located there. What attracts this side is the side is that the water here remains unceasingly clear and transparent, besides it remains at the same level throughout the year. It is astonishing to see that heavy down pours of rain does not raise its level or even the scorching heat of summer reduce it. It is said that that this place used to be the bathing ghat of Bandi's wife Shore. Her bucket of water petrified into stone remains in that place.

Matchru or the Animal Market—a stretch of flat rock replete with footprints of animals large and small.  It was never understood how only that stretch of rock has thousands and thousands of footprints embedded there whereas the nearby rocks are completely bereft of such prints. It was a myth that it used to be a market place where all kind of animals gather for their weekly markets.

There stands a massive flat rock in the shape of an upturned boat to the southern side near Mahadeo village. It is said that one night when Dikki, a legendary hero while making this boat, the cocks started crowing just before completing the task and hence the uncompleted boat turned to stone. The legend says that spirits acts only at night and their work needs to be complete before cocks’ crow.